ARE YOU WILLING TO SAY GOODBYE TO BRAYWICK SPORTS PARK? 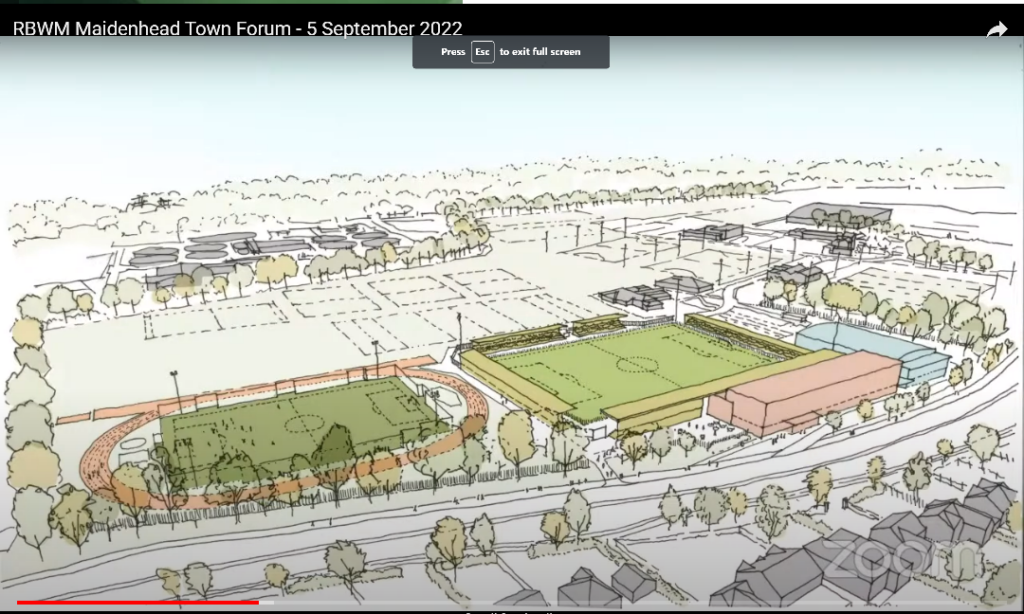 The effect on Maidenhead RFC and Braywick  Park  –  click here

Restricted use of new athletics track?? To be confirmed.

Increase in traffic and supporters to the ground effecting all users and residents in close proximity to the park.

Threat to Leisure Centre and existing sports facilities at the Park.

Over 22 football matches each season (Aug to May) with up to 5,000 supporters.

Potential for additional football activities at the Park throughout the week.

Massive increase in traffic and noise in addition to Leisure Centre and future development of the golf club.

How can you help?

Please send us your messages of support to [email protected]

Speak to your friends and neighbours and make sure that are aware of the impact of further development on Braywick Sports Park and Maidenhead’s overall green, outdoor space.

Forum video recording  – sound is not good but content is there

This proposal is giving with one hand to a comparably wealthy football club and taking away with the other hand from open air, grass sports facilities used by a community rugby club.

Responses to points made in the Forum presentation

We would be interested to find out which supporters he has spoken to as this is the total opposite to the feedback that I have received as Chairman of the club. When speaking to supporters, they are all horrified by the concept, as are their friends who are local residents to Braywick.

On 28th June, we had a meeting with the football club (Peter Griffin), The RFU, Sport England and The FA where we reiterated our objections to the move vehemently.

On the 12th Aug we had a meeting with Cllr Andrew Johnson, Cllr McWilliams, David Scott and Ian Brazier-Dubber to reiterate these objections just as vehemently.

And we still manage to play at the same level of sport (Level 5 rugby) as Maidenhead United does (level 5 football).

No significant funds available for capital investment.
Peter Griffin has leant the football club £1,319,338 as filed in their financial statement of 30 June 2021.

This is money available that is beyond the realms of reality to the rugby club or any other community club I know of. I presume most of it being used to pay players as their facilities do not seem to have benefited at all.

Extensive consideration of site options over many years.
In 2017, Jon Adams stated in a Maidenhead Advertiser article that “I can quite clearly say that our long term future is here” (referring to York Road).

So how long have they been searching for a suitable alternative site?

Considering that in our last meeting Peter Griffin stated that they did not have any ambitions to get promoted or move up the leagues, why do they need a 5,000 seater stadium?

Maidenhead Advertiser Friday 04 August 2017 – “The ground has the capacity to take 4,500 spectators but while Jon (Adams) did not expect the club to push to that amount in the immediate future, he said they could ‘easily have another 3,500 game here’, such as the Ebbsfleet match last season’.”

Opportunity to upgrade existing playing fields.
To non-grass surfaces not suitable for rugby and only to the benefit of the football club.

Losing 8 established rugby pitches used by ages from U6 through to U16 girls catering for circa 200 boys and girls. (see attached)

Establishing Braywick Park as the sport, health and wellbeing hub for the town.
It already is this without a massive concrete stadium and office facilities taking away open grass sport areas and competing with a fantastic new Leisure Centre equipped for all sports and abilities.

Facilities for the community!
Gym, there are already two on site

Indoor facility, there is already one, it is called The Leisure Centre

Disabled sport facility, there is already one, it is called The Leisure Centre

5 a side football – already covered at Maidenhead RFC 3G and also the council’s astro turf pitches and at The Leisure Centre.

There are additional slots available for 5–a-side on Maidenhead RFC’s 3 G but local companies offering 5-a-side leagues do not at present have the demand to take these up.

Local school facilities – already covered, it is called the Leisure Centre.
Sport England has already quite clearly told the football club that it would not support any part of the development, especially the indoor pitch facility and the gyms, that compete with the spectacular facilities already on site offered by the Leisure Centre.

Financially – with the club wanting to ‘Remove the dependence on benefactor’, this is purely a financial move to put coffers in the bank from the sale of York Road.

Financial security is based on what income at the new stadium? Part of the plan is rentable office space in the new facility, facilities that are already abundant in the town centre with new office facilities being built as we speak in the old 3 building.

Sport England has been repeatedly asking to see financial plans to ensure that this will not turn into a white elephant. Nothing has been forthcoming from the football club.

It must also be noted that should Maidenhead United for any reason suffer financial hardship, as the land and stadium will be leased, they will have no protection over freehold ownership that they have at York Road

Consultation.
There has been very limited and sporadic consultation with the rugby club. Apart from the initial meeting to inform the club of the move, all subsequent meetings have been at the request of the rugby club and information that was promised at those meetings to be forwarded to the club, Sport England and The RFU has never been forthcoming.

The rugby club sees Braywick as its own.

Not true at all. The rugby club has grown over many years through hard work by an army of volunteers and utilise Braywick because of our need and share it very amicably with all the other sports on the park.

Historically there has been football and cricket on the park, but over time, these facilities were not required and over those years Maidenhead Rugby club has expanded to use these areas as our hard work by an army of volunteers to provide the best quality rugby experience to thousands of youngsters throughout the community has been realised.

The rugby club will continue to object and fight against this unnecessary development on an existing high quality open air, green belt, established, community based sports centre and we will now start taking our objections public in light of the football club’s misleading statements and their constant failure to involve us in the consultation process.